This video is also available in the GOTO Play video app! Download it to enjoy offline access to our conference videos while on the move.

Dave Thomas and Andy Hunt conquered the world in the late 90s with the best-selling book The Pragmatic Programmer, which quickly became a staple for every programmer.

This book came straight from the programming trenches, cutting through the increasing specialization and technicalities of modern software development to examine the core process - taking a requirement and producing working, maintainable code that delights its users

20 years later, they are back with a new edition that has major revisions and new material reflecting changes in the industry since its first release.

Dave will take us through the world of software in the light of the books. What drove them to write the first edition? What did they learn through the process of writing the anniversary edition? What has changed since back then, what not?

What does it take to be a good, pragmatic programmer in the year 2020? 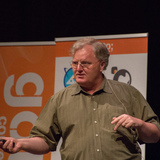 Author of The Pragmatic Programmer