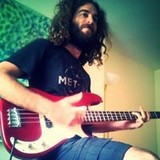 Founder at The Guild, the largest open source group in the GraphQL ecosystem

Imagine if one single talk at GOTO Copenhagen could make you so much more efficient that it would justify buying a full conference pass. Backend or frondend — wouldn’t matter. This is it!

Uri Goldshtein personalizes the phrase "less is more". Founder of The Guild, the largest open source group in the GraphQL ecodsystem, Uri Goldshtein travels around the world building stuff and helping developers. Attending his masterclass will give you the real power of scaling with GraphQL.

Uri Goldshtein started with assembler, C++, then C# and WPF before taking on the web. He will show you how to make magic happen with little to no lines of code using GraphQL. Everybody who thought they made it easy and efficient with REST, is up for a wakeup call!

Also in his personal life less is more. Uri owns only 30 things and they all fit in his backpack. Except his electric guitar which has a case of its own.